Search for do it yourself, DIY, topics
construction, buildings,
gardens, finance >

One of the main problems associated with green building is the implementation of new technologies into an existing structure. This limitation is lifted when designing a building from scratch. This allows designers to incorporate many new technologies that they wouldn't have otherwise been able to use. By considering which ones to use at the time of design some of the extra cost can be reduced.

When choosing the size and shape of a building there are many factors to consider. Where a building faces, what type of earth it is built on, what size a building will be and how much land is available to build all affect the design of a building.

When building green and trying to increase energy efficiency big is not better. It is important to design with as low a surface area as possible whilst still creating an adequate living space. This is because greater surface areas lose more heat and it is for this reason a bungalow with the same floor space available will be less energy efficient than a two-storey house.

Insulation should be among the top concerns when designing a new building. Building regulations have increased the amount of insulation required, and it is essential to check the current requirements for this before embarking on any insulation projects.

It is imperative that walls, roofing and floors be insulated as much as possible. This is much easier to do during the construction of a project then at a later date. Proper insulation is the key to maintaining heat within a building and in turn reducing CO2 emissions by requiring less fuel be burnt to maintain a comfortable temperature. 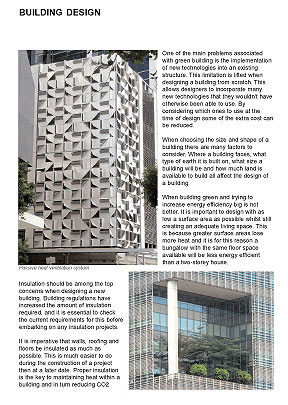 There is also shredded and treated old paper which uses a recycled material.

Natural wool tends to require more thickness than man made fibres so consideration during design is important to allow it to be used to its full potential.

The size and positioning of windows in a structure is important to how energy efficient it can be. Ideally more occupied rooms should be on the south side of the building to allow more sunlight to enter. These south-facing windows should be large enough to let as much heat in as required during daylight hours. North facing windows should be as small as required to allow enough light in during the day to prevent the use of artificial light.

Windows lose a significant amount of heat from a building and while double glazing with low-emissivity coatings is now required by law it is always prudent to fit the best windows that the project's budget will allow. The southern facing rooms will benefit from triple glazing windows allowing them to maintain the warmth gained from the sun even after it has set.

Light within a building is essential for safe and comfortable living. To minimise the use of artificial light a building should be designed to add as much natural light as possible. This can be done by ensuring that the most occupied rooms have large windowpanes as well as skylights if possible. Landscaping around the site should be taken into account, ensuring the building does not fall under heavy shade, especially during the winter months.

If trees are used close to the site, use deciduous ones, which will lose their leaves in winter allowing light in on cloudy days, as well as filtering out some of the hot summer light. Where artificial lighting is used low energy filaments can be used instead of conventional bulb filaments. These can only take low energy light bulb and work differently by supplying a small pulse of power to initially light the bulb before backing down to the smallest amount necessary.

Heating requirements looked into at design time have the possibility to bring about one of the largest savings to CO2 emissions. Underfloor hot water systems are tricky to install when added to existing structures but when installed during the construction phase are no more difficult then standard radiator based systems. If Solar Hot Water (SHW) systems are to be used additional roof strength may be required and this is a lot easier to add in during construction. The type and fuel of the boiler used in any heating system will also affect the design of a building.

For example wood pellet based systems will require a different type of flue to a condensing boiler as well as somewhere to store the wood pellet fuel. Micro-CHP (Combined Heat Power) generators will also require either a fuel store built into the design or be able to be placed where noise generated does not effect the occupants.

Ventilation systems come in two main forms mechanical and natural. Natural systems such as Passive Solar ventilation need to be designed into the home at the time of construction. These involve channels, which must be placed precisely, in which air is heated by the sunlight causing it to rise. This motion then pulls in air from outside.

Mechanical systems involve the use of fans to channel the air around a building. Space should be designed within a ventilation system to allow the use of heat exchangers that will prevent heat being lost through ventilation.

When designing a new building it should be designed to be as airtight as possible. This is to prevent draughts from forming allowing excessive cold air into a building and negating the work done by the heating system. Always ensure buildings are designed with an efficient air barrier and that care is taken during construction to ensure gaps are not created through poor workmanship.

Whichever style of heating and ventilation system is used it is important to have a good control system. Where possible rooms should have individual controls, allowing lesser used rooms to be heated only when needed, reducing energy used as a whole.

Sensors can be used to keep ventilation energy uses down. These can pick up on variables such as humidity and CO2 content of the air. This allows ventilation systems to run at lower rates when a lower level of indoor pollutants are around (for example when the house is empty and little cooking/activity is happening) and switch to higher rates when the sensors pick up pollutants at a pre-set level.

The type of material a building is made of will have an effect on just about every part of its design and construction. Materials made with a high thermal mass (such as concrete and earth based construction) will retain more heat then lighter materials such as timber. The storing of heat within a high thermal mass buildings allows slower heating systems to be used making them ideal for underfloor heating. Lighter structures will require a more reactive method of heat.

Sustainable and natural materials should be used where possible to reduce the building's impact on the environment. These also have virtually none of the toxic chemicals of the man-made equivalents. The chemicals have an effect on the occupants of a building during its use. Sick building syndrome caused by improper ventilation and solvents used in man-made construction materials can create an unpleasant atmosphere in which to work and live.

Fuel used in the transportation of goods should be looked into when considering which material is more environmentally friendly. For example there is no gain to using clay over lime based plasters if the amount of CO2 used transporting it from one end of the country to another is the same as the CO2 used to heat the lime during manufacture.

Electrical generation systems should be considered when designing a green home. These include Solar systems, Wind and Ground based Heat Pump, or even Geothermal. Where pile foundations are being used geothermal energy can be cheaper to install as much of the equipment required will already be on site. Solar panels for heating or electric generation will need to be sited on a south facing roof or wall in order to work efficiently. Wind based systems will need extra support if being placed on the roof of a structure with mast based systems requiring careful placement in order to be efficient and safe. Noise and vibration are also issues which need to be carefully addressed, in particular in regard to neighbours.

Water use in a building should be considered during design with grey water systems (which recover rain water for use in toilets etc.) being built in if possible. These will often require the use of separate storage tanks so space should be allowed for them in the design. Even small tubs can be useful for domestic projects, which can be used to water the garden.

Buildings should be designed to use as much recycled material as possible. This is very posisble with amateur projects, less so with professional builds. Support beams come from recycled timber, gravel used on site from recycled masonry, alate if used can come from de-constructed buildings, paint from recycled sources and even tyres filled with earth (which can then be covered over) to create landscaping features.

A well designed environmentally friendly home should include ways to reduce the occupants' impact on the environment as well as the buildings. These can include components such as compost bins to reduce the amount of rubbish sent to the landfill. Integrated Biogas systems which can take rubbish and turn it into fuel should also be looked into depending on the size, sighting and budget of the build. Where appliances are supplied with a building these should be the most energy efficient available.

Building design can be very daunting to the prospective green builder with many different materials, styles and methods involved. It is therefore advisable that you seek out Architects and construction companies to assist you along the way. They will help out with advice based around your dreams of a green home and also help to navigate you through some of the pitfalls of building design such as building regulations.

A well designed environmentally friendly house will provide the perfect living atmosphere, efficient heating and ventilation systems will banish cold draughts, excellent insulation will prevent heat from being lost, natural light will be allowed to flood a room giving it a warm comforting aura and all these effects come together to save both the planet and the wallet by reducing annual fuel bills and carbon emissions drastically.