Home energy use is responsible for 28 per cent of the UK's carbon dioxide emissions which contribute to climate change. Reductions in energy use can be made by using 'passive' systems in the site layout and design.

The construction of new buildings requires a lot of planning. If green technologies and practices are considered during this planning stage a huge amount of work can be saved when compared to retrofitting existing buildings. The location, design and materials used in a buildings construction can greatly reduce its impact on the environment without negatively affecting a building's practicality.

When choosing a design for a new building it is important to recognise the power of the Sun. Building with passive solar design in mind can drastically cut fuel bills by reducing energy required to heat a home, produce its own energy and reduce the need for lighting systems.

There are 5 key points to consider when building passive solar design into new construction projects:

Designing a building so that the main occupied rooms such as living rooms, bedrooms etc. face south in the UK (optimally 30 degrees south) allows them to absorb solar heat. These rooms often need the most heat with kitchens, cloakrooms and other lesser heated rooms on the north face. This cuts back on the amount of artificial light and heat needed in the most commonly occupied rooms during daylight hours, a small saving but one that adds up over a building's lifetime.

The effect can be further enhanced by using triple glazing or good double glazing on south facing windows to trap more heat. The south facing windows should be large and well insulated to absorb and trap as much heat as possible, with smaller windows on the north face to reduce the amount lost through them. Even the most energy efficient window will still lose 6 times the heat of a wall.

For an estate in the Northern Hemisphere, the same applies. Smaller buildings should be placed the most southerly on the site, with the largest buildings located at the north, to prevent shadows from blocking the efficiency of passive solar design.

Garages, parking spaces and other non essential structures should always be placed north of the home they are connected to, this is particularly beneficial to parking spaces to prevent cars from excessive heating during the summer.

Buildings do not all need to face the same way into the Sun and can be rotated slightly allowing for a less uniform look.

When designed so that one side is often facing the Sun a building can be made to save even more on heating and energy expenses. Solar heating panels can be placed onto the roof which when coupled with underfloor water based heating systems can provide free heat for a building even during winter months. Solar Photo-voltaic (PV) panels can also be placed onto the sun facing side of the building to generate electricity which can even be sold back into the power grid.

Passive Stack Ventilation (PSV) systems use the heated air of a building to draw air through a building, as the hot air rises out of a building it pulls fresher air into it. This has the advantage of a completely silent ventilation system and also does not require any fans to operate reducing the energy requirement of the building.

Similar to PSV systems are Passive Air Heaters. These are common in parts of Scandinavia and consist of a box placed externally to a building. The box is covered in heat absorbing material and heats the air inside. This causes the hot air to rise, which can then be channelled into a building creating a natural and free heat source ideal for space heating as well as a source of ventilation. 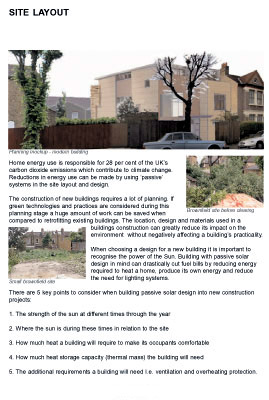 Consideration should also be given to the material of a building's construction where it is possible to make full use of passive solar design. When a site is exposed to the sunlight, heavier denser materials such as Concrete, Rammed Earth, Cob and other masonry should be considered over lighter, less dense material such as Timber. This is because the buildings walls will soak up the heat during the day cooling it in hot weather and release the heat slowly in the colder nights. The measure of how much heat a building absorbs is referred to as its 'thermal mass'.

Buildings with a high thermal mass will require less internal heating then those with a low thermal mass. The type of heating will also be different, in a high thermal mass building slower storage heating type systems such as water-based underfloor heating work particularly well. In contrast these systems are not as suited to timber construction due to the warm up time required (a timber building will get colder quicker) and in these builds thermostatic systems or warm air based systems work best as they can reach a useful heat quicker.

In colder more windy climates it is good practice to site commonly used rooms away from the direction of the prevailing wind. In these climates a wind turbine could be an ideal source of extra electricity. These are particularly suited where average wind speed is above 10 mph and can be pointed into whichever direction the prevailing wind is coming from.

Where shelter from the wind is required natural methods should be used as much as possible. Trees can be planted that grow to a level below that of the turbine, earth banks can be constructed from recycled car tyres rammed with soil near a property to channel the wind over it.

Cornish Hedging can be used along the side of access roads to prevent wind from causing dangerous driving conditions. This can be further increased by planting trees along the top of the hedging.

When considering a site's layout the form of heating and electricity that will be used needs to be considered. Wood burning boilers while carbon neutral require somewhere to store the wood pellets used a fuel.

Passive solar heating, solar hot water and solar power all require large amounts of space for the panels and can not be under heavy tree cover and shade. Biogas will require the addition of a separate tank and fermenting area and wind turbines are often heavy and need specialist mountings.

The fitting of a ground source heat pump is much easier during construction then after. If a building is using pile type foundations costs are reduced even further as bore holes will already be being dug on site. The depth of the borehole required will vary from site to site (less depth required means a cheaper installation) so investigate sites fully before committing to a build.

Sites which require landscaping can also aid the green builder. Instead of removing earth from the site it can be used as a building material. Rammed Earth, Cob building and Cornish Hedging all require the use of earth and can be used to create boundary walls etc. out of material that would normally be disposed of.

Plant and wildlife is also important to a site. Trees help prevent rain water run off soaking it up and help to prevent against flash flooding and so reducing the load on drainage systems. Trees can also provide valuable shade in warmer climates. Deciduous trees should be used when they have the potential to grow above the shadow line of a property. This allows the leafs to block some of the sunlight in the summer months preventing overheating and the bare branches in the winter allowing light to shine through. Small trees and plants can also be used in place of walls or fences allowing privacy to be maintained whilst letting light still reach the property, unlike a solid wall or fence.

The local area around a site should also be considered before choosing a design. If the site is near to forestry a wood burning boiler may be practical, as they require regular resupplying (up to twice a week). If small streams and rivers are nearby it may be possible to generate electricity using micro hydroelectric turbines. Sites in wet climates will require less space for catch water systems and sites in warmer climates will be able to make greater use of solar technology.

Overall design should be made to make the building as compact as possible. The larger the building the greater its surface area. This results in more heat lost from the structure. Optimising the interior space by good design allows less heating and lighting to be used as well as less material during the construction of the building. Paying attention to the small details can result in a large saving when applied to a whole building.

If the site requires new roadways, recycled asphalt can be used which, although having a lower speed tolerance (often rated to around 40mph), will reduce the need to dig fresh rock and will be perfectly adequate for access roads. Recycled building materials can be used to form gravel areas of the site and even compacted down to create pathways and parking areas. These in turn can be lined with small trees and shrubbery to reduce the need for solid fencing creating a much nicer environment for people. They will also reduce the 'urban island' effect where large areas of concrete construction heat up in the sun due to a higher thermal mass than natural areas, often creating unpleasant overheating in summer months.

When large construction projects such as new housing estates are being considered it may be worth investigating the prospect of district heating systems. These systems are popular in Eastern Europe and consist of large gas fired plants located close to urban populations. These plants are also highly efficient when used to generate energy using a combined heat and power (CHP) generation system. Hot water or steam is pumped from the plant in insulated pipework underground to buildings to be converted in the boiler as heated water for residential use. The water in the pipework stays in the pipe with heat being transferred to the water being used internally within the building.

The main limiting factor is the distance from the plant as water tends to loose heat rather rapidly over greater distances. The effect of district heating can also be reversed allowing cooler water to be pumped around reducing the need for energy intensive air conditioning systems in the summer months. The electricity generated nearby is also more efficient due to less energy lost as heat in the overhead cabling, with electricity travelling a shorter distance to buildings.

Future district CHP systems are being researched which can use biogas. These will have the added environmental advantage of taking an area's waste products and instead of piling them uselessly into a landfill far away (requiring transportation), allows them to be converted locally into power, heat and fertiliser for natural areas.

Considerations made during a site's planning stages can make big impacts over the life of the building. These can range from the small (passive solar design) to huge projects of an industrial scale (district heating/cooling of new housing estates) but no matter what the size of the change it is vital that changes be made if we are to turn the tide of climate change and reduce man's impact on the environment.