Peranakan and Baba-Nyonya in Singapore and Penang Malaysia

Peranakan and Baba-Nyonya are ethnic names for descendents of the early Chinese settlers in the Malay area, what is now Malaysia and Singapore, and Java, in the 17th Century. The Peranakan culture is a blend of Chinese and Malay with some influence from Dutch, English, Portugese, Dutch, Thai, Indian and Indonesian. They are also known as Straits Chinese. 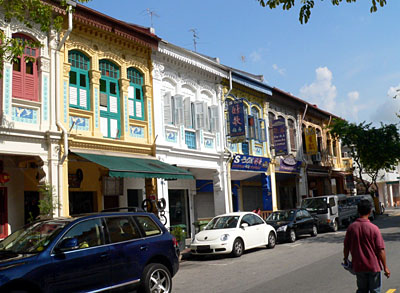 This has led to a community that observes Chinese customs but has strong Malay influence in dressing, language and food. It is found all over Malaysia, especially in old Dutch Malacca, and Singapore.

Incidentally there is a Nyonya restaurant near the London offices of BuildingDIY in Wimbledon Park. 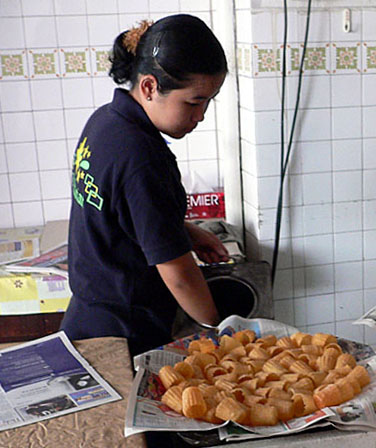 Penang in Malaysia has many good examples of shophouses. George Town on the island of Penang is a UNESCO world heritage city.

They are a big tourist attraction along with many fine examples of Indian, Thai, Chinese and British colonial architecture.

Many shophouses are falling into disrepair, and a special committee has been set up to encourage architects and builders, and property developers, to renovate them.

Some are even turned into swifthouses - for making nests for bird's nest soup.

For many more images of Singapore, Vietnam and more see the BuildingDIY image gallery >

The image above shows some traditional 'shop houses' which have a mix of East and West in construction and details. Chinese tile work and symbols mix with Corinthian columns and Mediterranean windows and doors. There are 6 styles of shophouses, all in use today in Singapore. Peranakan houses are famouse for Chinese influenced tiles and tiling. We have many images of tiles, houses and the culture which will be uploaded soon.

The six main styles are historically:

Support the walls and roof. Rise above roof and prevent fire spreading.

Timber fascia and fretwork are on the eaves, this is a Malay feature.

Decorative work is in tile and plaster, very distinctive.

Walkway in fron of the shophouse. It is covered all the way along and means people can walk along and stop easily out of the sun or rain. A very social feature that is found all over Malaysia and in Peranakan shophouses in Singapore and Malacca.