Gabions are the square metal baskets full of earth or stones that stabilise land on slopes and cuttings under bridges, along roads and railways, and along the coastline and waterways.

Gabions are used in many situations including the stabilisation of earth movement and erosion, river control, resevoirs, canal refurbishment, landscaping and retaining walls. They can be manufactured in welded mesh or woven wire. Welded mesh gabions are faster to erect and do not need tensioning.

This allows them to keep their shape, to be free from bulges and depressions and fit easily against the wall. It is possible to cut holes in them if needed to pass pipes etc through and they can be machine filled.

They are also used to make freestanding walls, but this involves extra supports. They are used a lot on embankments where they also provide drainage.

Old tyres can also be used to make gabions, or full scale walls which are called bankshores.

These hardwearing fences made of tyres are in a school playground. 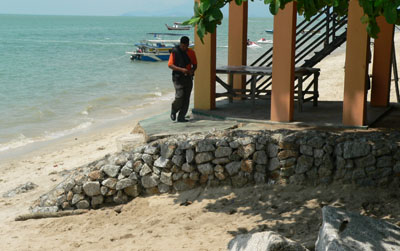 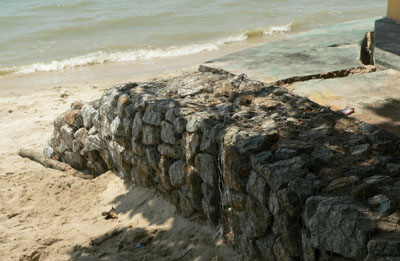 Bankshores are an eco-friendly alternative to gabion baskets as they use use recycled tyres in place of rocks or stones.

For information on gabions and bankshores, contact the Cornwall Sustainable Building Trust.

Bankshores were invented by Peter Smith, age 56, born in Swanage.

"The Bankshore has a lining inside so they can be filled with rocks, earth, or anything, and then placed anywhere. I'm hoping they can be used in the Third World to combat flooding, and prevent landslips and the erosion of riverbanks."

"Bankshores need virtually no engineering skill to install. They can be put up very quickly, in the aftermath of flooding, perhaps, to keep roads open and allow supplies to get through."

"I'm trying some ideas like putting timber through them and weaving in some willow and subsoil.

And if it's a sea defence, it will soon become home to crabs and molluscs and become a living thing in itself."