New studies show that rate of growth of population is down, due to demographics, as more better off people in the developing world are having smaller families.

This is the big ecological and climate change pressure - it is not just current emissions. Global population is now at a transition point:

200 years ago, fewer than 3% of people lived in cities. That means that 97% lived in rural conditions.

Nearly all of the extra 3,500,000,000 people expected over the next 50 years will be born and live in cities. Recycling and buying an organic cotton shirt won't make much difference to them.

The current Western 'return to nature' and organic movement only works within a sophisticated modern society, and completely ignores the needs of the vast majority of the world's population, who need cheap clothes and food, and don't mind how it is made.

Is it ironic to wear an pure organic shirt, costing three times an ordinary shirt, whilst driving around in a Hummer or Saab powered by biofuel, from plantations grown on tropical rainforests? And proclaim one's green credentials?

With a population this big, compromises have to be made to ensure global equality. It is no use Western consumers wanting to reduce development in the rest of the world so they can maintain an elite position in the food chain.

There is a strong strand of neo-colonialism in the 'save the world - for us' mentality. To tie producers to organic farming means they can never get anywhere near productivity levels of modern farms. Yet they will produce their organic cotton for the tiny number of so-called ethical consumers that demand the purest cotton for their white skin.

Green fascism is the idea that world population should be reduced - no one says how! - to make the people fit the planet, not the other way around. We think it is fascist to expect the world to use old methods of so-called organic farming with low yields, as this will result directly in starvation. The 'body' of the world needs to be trimmed, according to these 'green fascists' - who are very common in the first world eco warrior sects such as the Tory Party (only joking!).

The issue of pesticides and worker and consumer safety is another issue, related to development and human rights.

The global figures are rather amazing. China is supposed to be opening a new coal fired power station each week, 15 new petrol stations a day, and a make a million new cars every two months. Pollution is so bad that for the 2008 Olympics, the delegations of dozens of countries are setting up training bases in nearby countries, and planning to fly to China at the last minute in order to minimize exposure to what they say is a 'hostile environment'.

As eco builders, we note that all eco, sustainable products are very expensive, and fit into the 'luxury' spending bracket. Or they are home made, for amateurs and enthusiasts only. Most people in the world are poor, and cannot afford expensive organic clothes, or the cost overhead of micro-generation systems etc. 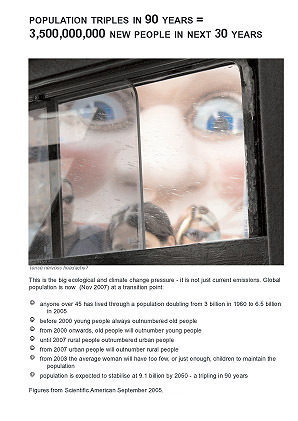 The challenge is to make sustainable systems cheap through mass production; and to make mass produced systems show their true cost by including things that are left out, such as transport effects, which are usually subsidised by governments to promote economic growth, pollution clean-up, bad health effects, and loss of local control.

The eco consumerist position - green shopping - has some quite powerful friends in the green movement. Yet this seems to be pointless as it does almost nothing to alleviate poverty, since the numbers are so low. The book Enough by John Naish addresses this conundrum, and recommends people have a 'sustainable personal ecology' in order to be '100% happier and 100% more productive'. His big idea is to ditch consumerism, even if the goods are organic and ethical. This is the old hippy approach isn't it? And that doesn't work at a large scale, not even in communes.

Population and increased economic activity in the developed and the yet-to-be developed world will put a huge strain on the world's resources - perhaps a 100% increase in a very short time frame of 20-30 years.

Factor in peak oil, when oil passes the peak level of production and starts to fall, which is either 2020-2030, or already happened, and things get rather complex.

In which case high tech solutions such as GM foods, intensive farming, nuclear power, as well as more sustainable practices, appear to be the only way to avert catastrophe.

Optimists think that alternative energy sources will be on stream in order to replace the dependence on oil in all aspects of modern life, from transport to plastic. Pessimists predict a global collapse and return to barbarism.

We say: think globally, act locally. And worry is bad for your health!