Since the recession of 2007 and onwards, there has been a newspaper backlash against 'ethical' and 'organic' goods as an expensive irrelevance.

There are new scientific studies showing that organic food is no better for you than 'normal' food. This is all well and good.

The benefits are for the environment in reducing pesticide residues in waterways and soil, rather than the effect on food. This is beneficial for the makeup of the soil. Also monocultures of plants in modern farming are bad for the general environment. This is obvious, but seen as irrelevant when a crisis strikes (although why no one ever says).

There is huge ignorance of modern methods in the green movement which always makes them look like luddites at best, or money grabbing idiots at worse. False claims for organic goods are made by the sellers for the usual marketing reasons.

There is a big debate around whether any shopping is green - since reduce, reuse and recycle means just that, not replace all the old stuff with fashionable organics.

Since most people won't change their habits, ethical shopping is the only way to avoid exploiting children and workers in the developing world, mainly India and China.

Apart from not buying anything new of course! Second hand shopping from charity stores and Ebay is very commendable, cheaper and recycles items. Wearing a recycled t shirt is better than buying a new organic one.

Cotton farming makes up 10% of the world's agriculture, on only 2.4% of agricultural land, but uses 24% of the world's insecticides and 11% of pesticides. Organic cotton has no pesticides or chemical fertilisers. One commercial cotton T-shirt requires over 2 pounds of toxic pesticides be applied to the earth.

100 million conventional cotton farmers live in near total poverty. That is a big issue addressed by ethical business.

20,000 people each year die of poisoning from pesticide; starvation and suicide are common due to debts.

200,00 suicides a year are attributed to farmer's debt. 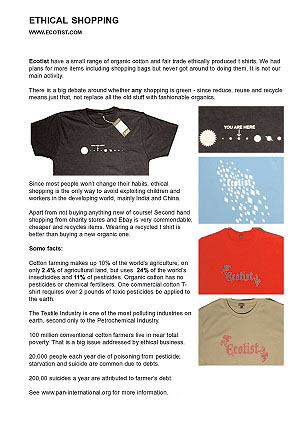 The Textile Industry is one of the most polluting industries on earth, second only to the Petrochemical Industry.

The UK market for very cheap clothes has expanded by 45% over the last 5 years (2002-2007) to over 6 billion GBP. At Asda, two men's shirts can be bought for £5, jeans for £3, and a suit for £15. The hourly wage at a typical Indian garment factory is 13 pence per hour. Child labour is very common, almost universal, and these jobs are damaging to the children or young adult's hands and eyes, quite apart from the very long hours and seven day weeks.

These goods are produced in sweatshops and are a very clear example of outsourcing pollution and Victorian labour practices. It is of course very ironic that most of this near slave labour happens in China, ostensibly still a Communist country.

It is claimed to be 'affordable fashion' for the masses, but actually people buy more versions of clothes, and throw them away more quickly. The cheap clothes are of low quality and do not last or ever get repaired. Since cotton uses up such vast quantities of resources, this is a very unsustainable way to get dressed.