This was a demonstration house by the new Centre for Alternative Technology, built by the Wates Built Homes company, at Machynlleth, Snowdonia, Wales, UK to show green techniques could work and save energy.

It is mainly about insulation, and a family would need no extra heating apart from that from their own bodies to keep warm.

It is very simple by today's high tech eco standards. It was to show the use of insulation - the walls have 450mm of glass fibre cavity insulation between normal brick walls, and the windows are quadruple glazed.

Passive solar heating, using large sun facing glass areas, was not used as it was not known about at the time. Later a glass extension was added to trap heat.

Electrical and water and service pipes are run through the centre of the building to conserve heat.

Air permeability was also not known about so there are no trickle vents etc.

It was also designed to look like a normal house, as green was a new concept then. So it is pretty ugly. The roof tiles are insulating concrete, although we (as builders) have used composite slate tiles which are very thick, made of recycled materials.

u Values are 6 times higher than needed by current building regulations. 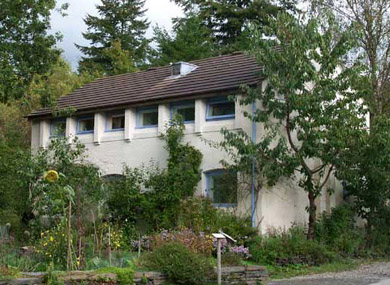 Wates built it in 1975. The then new Centre for Alternative Technology was opened by enthusiasts - 'green' was very new then, and political debate was very polarised between the workers and the bosses; so green was the preserve of idealists and left over hippies.

Unlike now when the Conservative Party in the UK claims to be more green than everyone - except perhaps the Green Party!

Now the Centre for Alternative Technology gets 65,000 visitors a year and green is mainstream.

Image from the CAT site.