We like sparrows. In our south London garden we have lots of blue tits, wood pigeons, magpies, starlings, even plentiful robins.

Even a wren appeared a few days ago. And today a heron! Note Nov 2008 - parakeets have arrived in Wandsworth, London SW18 at Wimbledon Park and Southfields. They have moved territory from Pinehurst Studios - they escaped during filming of African Queen (allegedly).

But hardly any sparrows.

Until about ten years ago, the house sparrow (Passer domesticus) was one of the commonest birds in London and was one of the most numerous and regular visitors to garden bird tables. The 'Cockney sparrer' has always been a firm favourite with Londoners, reflecting its lively social behaviour and relatively tame nature.

W.H. Hudson (1841-1922), a nature writer, wrote some poetry, including a touching tribute to 'The London Sparrow' - 'O blithe heart in a house so melancholy."

In Hudson's day, sparrows had been present by the thousand in the parks of central London. However, on 10 September 2000, a London Natural History Society 'Bird Walk' around Hyde Park and Kensington Gardens failed to find a single one.

There is much evidence that this once abundant bird has declined dramatically in recent years. It is now common knowledge that house sparrows have disappeared, or become far less common, in many places where they were formerly abundant. This applies both in the centre of London and many of the suburbs, as well as some of the surrounding towns and indeed a number of cities in other parts of the country such as Bristol and Edinburgh. 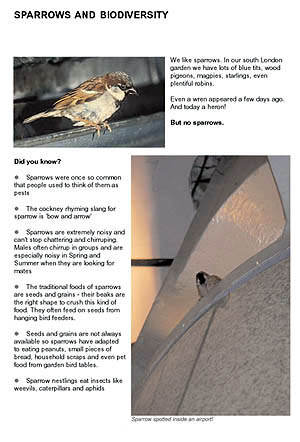 For free diagrams of how to make a bird terrace, see www.beautifulbritain.co.uk

Or buy one at www.shopping.rspb.org.uk