For instance a rainforest has very high biodiversity compared to a wheat field.

Modern agricultural practice tends towards monocultures, where very large areas are planted with one crop species, and herbicides and pesticides are used to enforce this monoculture.

For instance, age-old forests in Indonesia and Malaysia and being replaced by huge palm oil plantations, or rubber, with snakes the only animals, introduced to keep down rats and small mammals. This is why the orang-utans are dying out, as well as millions of other species including insects and smaller lifeforms.

Palm oil is used for biofuel and many food additives. So when you see an ad for a Hummer or Saab using biofuel, it is not green!

What to do in your garden 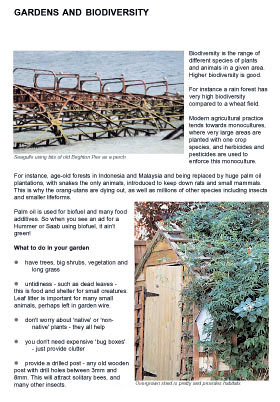 Why is biodiversity good?

The plants and animals on this planet can be called 'ecosystem services' which recycle waste products and provide all food, materials, water, shelter etc. Everything in fact that isn't mined or pumped out of the ground (although oil is natural it is time shifted). Because of the rise in human population, and the increased dependence on non-natural systems such as cities, roads, transportation, all the natural systems are under huge pressure. It is estimated that half to two thirds of all species on the planet will be extinct in 100 years time.

This means that the ecosystem services are in danger of collapse, since they will be under increased pressure to make more of the stuff we need, while being pushed out by the human populations they support.

Climate change is one result of increased urbanisation, quite apart from heating through increased greenhouse gases.

Official BTO (British Trust for Ornithology, see below) figures suggest a decline of some 51% over the last 25 years.

To sustain biodiversity, special sites need to be preserved that are very ecologically diverse. 25 such 'hot spots' have been identified.

Economists view all this as just a question of balancing risk factors. It is good to feed lots of people using modern agriculture, and worry about the problems in the future, since the situation will be different to anything predicted now.

This is the crux of the issue, since we are also part of nature, and it is obvious we put ourselves ahead of plants and animals, but at a risk of damaging the systems that support us.

London now has a Capital Woodlands project. This is to increase access and care of urban woods. It is a three-year London Biodiversity Partnership project (2006-2009) supported by the Heritage Lottery Fund.