For everyone that's ever had a beautiful garden, or at least attempted to have one, you definitely know that pests are part and parcel of every garden. Even in cooler climates as in the temperate zones, such as the UK, pests pose a serious threat to garden plants.

Some are seasonal, and make an entry and exit with the changing seasons, and some become permanent residents. Now these are the ones you have to watch out for! They could end up ruining your garden.

Some pests are taken care of and kept in check by nature, birds, lizards (yes you do get them in England now), frogs and predatory insects. However, once you are able to identify the type of pests living in your garden, devising a strategy to save it from destruction seems to become simpler.

Some common pests found in gardens in cooler regions of the world are aphids, different types of beetles, caterpillars, mites, mealybugs, scales, thrips, and whiteflies, only to name a few. Plus the usual snails, slugs, rabbits etc.

Aphids grow in new plants and nest under succulent fresh leaves. They come is several types such as the 'standard' aphids, familiar to everyone. Others are the woolly aphids and the root aphids. Aphids destroy new growth and help build a sooty mould on the surface of leaves. Woolly aphids make a woolly white deposit, and guess where root aphids do the damage.

Mealybugs, are also aphids, and attack mainly houseplants or greenhouse plants. Mealybugs suck the juice out of plants, leaving them limp and wilted. Scales too suck plant juices, making them wilt and turn yellow. This damages the plant and stops its growth.

Scale insects are also in the aphid family and come in hard and soft varieties. Symptoms are similar to those from whitefly which are found mainly in greenhouses. Honeydew is produced by the soft scale insects and this makes a mould that kills the plant. 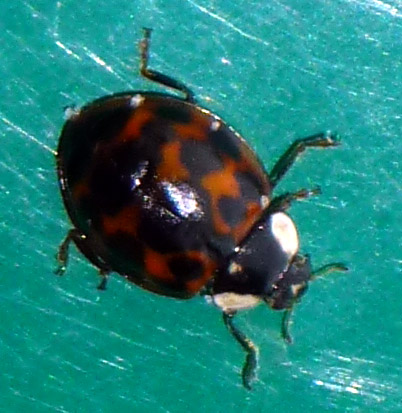 Above: Ladybird is good for garden (photo taken with a Lumix DMC-FS5 see Cameras page >

Beetles destroy plants by chewing into them, creating tiny holes in the leaves, stems, fruit and flowers.

Caterpillars are a larval stage (instar) and eat leaves to bulk up before forming a pupae and metamorphosing into flying insects. They too harm plants in the same way by chewing them.

Spider mites are very tiny and also also suck plant juices, turning the leaves silvery, and curly. After the juice of a plant has been sucked by a mites or thrip, it will develop yellow dots, and the plant will die soon. Thrips are small dark insects, which are keen on tomatoes and onions. Thrips are also called thunderbugs or thunderflies as they congregate during storms.

Other garden pests include snails, slugs, cabbage white caterpillars, sawfly larva, carrot fly grubs, leatherjackets (larva of crane flies or 'daddy long legs') and many other grubs and larva which have a huge appetite for your plants.

We have many spiders in our garden and assume these are predators so useful for natural pest control. (Although a vegetarian spider species has recently been found in Central America.) We have seen a robin pick up a spider and make off with it, so more spiders might mean more pretty birds.

On the larger size we have moles, rabbits, and of course foxes and squirrels which are relative newcomers to city gardens. Squirrels will quite happily munch through all your buds and bulbs. 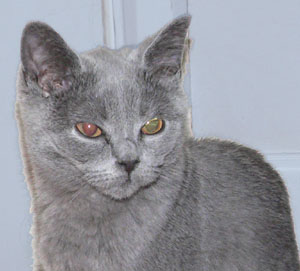 Cats - yes domestic cats - are a bit of a menace as they dig up the garden, urinate all over the place and kill helpful and pretty birds and animals in huge numbers. They are very bad for gardens and biodiversity.

Worms, or more accurately earthworms, are great for your soil but can attract moles (this is more a country problem than a city one). The casts of soil also attract birds and can mess up your garden and drainage.

This is only with a biblical deluge of earthworms so don't get too worried.

Pest birds include gulls, pigeons, feral wood pigeons, even herons if they are eating your outdor fish or carp. Smaller birds are usually good for the garden as they eat insects and tidy up.

This is only natural of course! There is a case for rewilding your garden - you also have an easy life into the bargain. See our other pages.

You must be really scared to step into your garden now, and wondering how on earth you're going to get rid of these pests! Well, there are basically two ways. You could use the organic route, or chemicals, which may however also harm the healthy plants.

You might be surprised to know that wasps, ladybirds, (ladybugs or lady beetles), predatory insects such as assassin bugs and wasps act are natural biological control for garden pests. Fennel can attract ladybirds.

DO IT YOURSELF PEST CONTROL

Do it yourself pest control is easy and quite fun. Chemicals are nasty to use as well as bad for the environment.

You could use a mild, soap solution to wash off aphids from plants. Scales, caterpillars, mealy bugs, whiteflies, spider mites, stinkbugs, beetles, and thrips can be washed off with natural insecticides like pyrethrin, rotenone and insecticidal soap.

One of the simplest and most effective ways to rid your garden of pests is to collect them in a container filled with alcohol. It's simple and cheap too!

Another simple method to prevent further damage to plants is to simply cut off damaged parts and protect what's left with soap solution and daubing some pests like mealybugs with alcohol.

Nematodes, which are found in abundance in the soil in temperate regions can be increased in number and used to kill garden pests like slugs and caterpillars.

Look at our other pages on organic gardening to increase biodiversity.

If you resort to chemicals use them sparingly as they could harm perfectly healthy plants and insects alike. Some effective chemicals are diazinon and sevin for caterpillars, beetles, mealy bugs, and thrips.