A bright sky at night caused by city and town, and factory or transport system lights  known as light pollution - is environmentally bad, as nocturnal animals, bats and birds, also insects etc, are confused and thus damaged.

Also, people cannot see the stars in the night sky, one of the wonders of nature enjoyed for millennium - until now! Astronomical observations are hindered by light and ordinary people do not bother to set up telescopes in their back gardens.

In London where the author lives, it is hard to see any starts, occasionally planets can be spotted. A clear dark night is still lit by skyglow (see later) from a nearby road. It is only very late (3am) that any stars are visible. 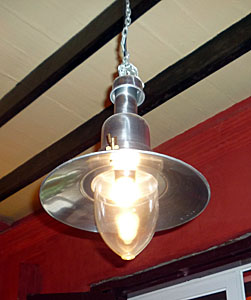 Categories and types of light pollution

There are many causes of light pollution. These include:

A particular light may fall in many of these types of pollution.

There are many causes of this, and it is difficult to stop, since most night time lighting is safety related. As urban areas spread into previously rural areas, and suburban areas become more densely populated, light pollution is increasing rapidly.

In villages this is well-known for helping a vast increase in social and economic activity as people can stay up later. So how can anyone stop that in favour of the bats?

There is now more concern over this pollution, as eco systems become threatened in an un-ignorable way. International Dark-Sky Association (IDA) has been formed to raise awareness and try and get governments to light up less, as they control lightin gin cities and towns, and on roads and railways.

See our lighting and lights pages: