There are four types of extractor hoods but many names for them:

Most commonly they are installed directly above the oven by being mounted on the wall.

Integrated hoods are built into the kitchen cabinetwork or wall units. They are the cheapest of the four and suitable for a small kitchen because they look discrete and if fully integrated they even look like the kitchen unit or cabinet door.

Free-standing hoods which come with the freestanding oven and hob combination. These often come with the splashback to physically and visually connect the hob and the hood and so is a neat option for those who have selected the all-in-one oven, hob and hood cooker range.

These are more elaborate versions of the integrated hoods. By being not integrated, they are bigger and more efficient but more noticeable too. 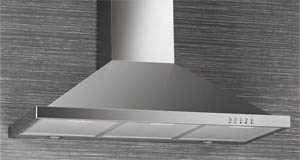 Above: Chimney extractor hood against wall

Island range hoods which are ceiling-mounted and directly over an island unit hob. These are the most expensive of the four types because they need ceiling reinforcement and they are the most efficient way of extracting. The disadvantage is that they are very dominant and visible, and so they are unsuitable for a small kitchen. 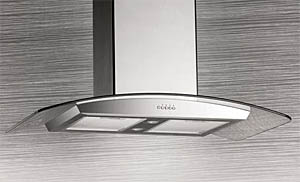 There are two ways of extracting the smells and grease from the kitchen: