A cooker is the actual kitchen appliance. An oven is a unit that heats food. The terms are generally used interchangeably.

A stove or cookstove is an enclosed space for heating and also cooking and baking food. A gas stove, used as a kitchen stove, is an old-fashioned solution. Aga stoves or cookers are still around and recently got in trouble for claiming to be 'green' as they also provide space heating; but the energy sums show them to be very bad for the environment.

A pressure cooker is actually a type of pot that has a sealed lid with a pressure guage. Increased pressure inside causes food to cook more quickly retaining flavour and nutrients. They are known to explode the pressure safety release with heart-stopping effects.

There are in general five types of ovens. 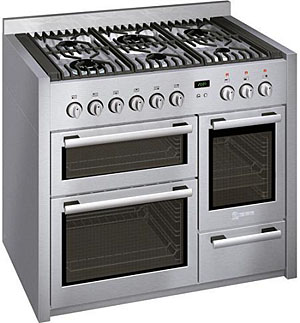 The fan may cause the ovens to be noisy even for a few minutes after the oven has been turned off. It may be 'too' efficient and dry or burn the tops of food. In models with double ovens, one would be a convection oven and the other a conventional with grill option.

Microwave ovens use microwave radiation to heat polarized molecules within the food. Basic microwave ovens heat foods quickly and efficiently. They do not brown or bake. Recipes are usually designed for the typical microwave cooking power of 600 to 700 watts.

Steam ovens are ovens with steam as the sole source of heat, via a refillable water tank that does not require a direct plumbing connection. Steamed foods are healthy and quick to cook as well. These are more suited to large kitchens because their function is limited to steaming. 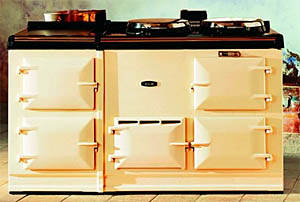 Above: Aga cooker - traditional, historic, very energy inefficient, does cooking and central area heating badly, should be phased out - but is nice to sit next to

Ovens can be built-in or stand alone. Built-in ovens work better for small kitchens because they save space and there can be storage built around it. Stand-alone ovens are more professional-looking and suit large kitchens. They would also be combined with the hob or cooktop whereas in the built-in ovens, the hob or cooktop has to be built in separately on the worktop.

Most ovens are now electric ovens. Gas ovens are considered unsafe. An oven fits a space that is 600mm wide or 900mm wide. The interior of an oven is rarely given any thought, but it will affect the types of food that one will be cooking. Basic models would not be able to accommodate a Christmas turkey.

They also have options such as one-touch baking, infinite temperature settings, recipe memory, and preprogrammed settings. Some manufacturers also make smaller "convenience" ovens, or budget ovens meant for flat items such as one TV dinner dish or a pizza. These have knobs or dials to regulate heat and timers, some being digital.